Less More
9 years 1 month ago #8 by len.bowers@kcl.ac.uk
Welcome - Mutual Help Meeting was created by len.bowers@kcl.ac.uk
Have a question about the Mutual Help Meeting? Had some experience with using it that you could share and that might help others? Found a particularly effective way of adapting it to your hospital? Please post it here in this section of the forum.
Less More
8 years 11 months ago #75 by johnsonbecky84@hotmail.co.uk
Replied by johnsonbecky84@hotmail.co.uk on topic Welcome - Mutual Help Meeting
I've attached our minutes from our very first mutual help meeting on the ward. It went really well. Generally on the ward the community meetings were always well attended by the ladies and so we kept the meeting at the same time (Friday mornings). We had already had the posters up for about a week all over the ward and kept highlighting these to patients. In the morning we have a 'plan your day meeting' for all patients to attend which tells them what activities and groups are available that day and who is their allocated worker so we told them all about it then as well and most of them agreed to stay on the ward and go on leave later so they could see what it was all about. I think a few were quite sceptical at first about what we were implementing and what we were trying to do.

The 'offers' part at the end was the bit that patients found most useful. They found the peer support really positive. One of our new service users (who had never been admitted to an acute psychiatric ward before) approached me afterwards and said that she had been really frightened of some of the other ladies, in particular a few that she had observed responding to voices and she said that during this meeting she recognised that actually they were just a person as well who needed support like her and she no longer felt scared of being on the ward as she saw them in a different light.

We also invited a ex-service user who had recently moved on from Keats ward after 2 years on here. She came back and gave a little talk about the ward and how it had helped her move on. We think we'll do this on a regular basis from now on.

We provided tea, coffee, biscuits and cakes as well that were made at the baking group the day before!!! These went down a treat. 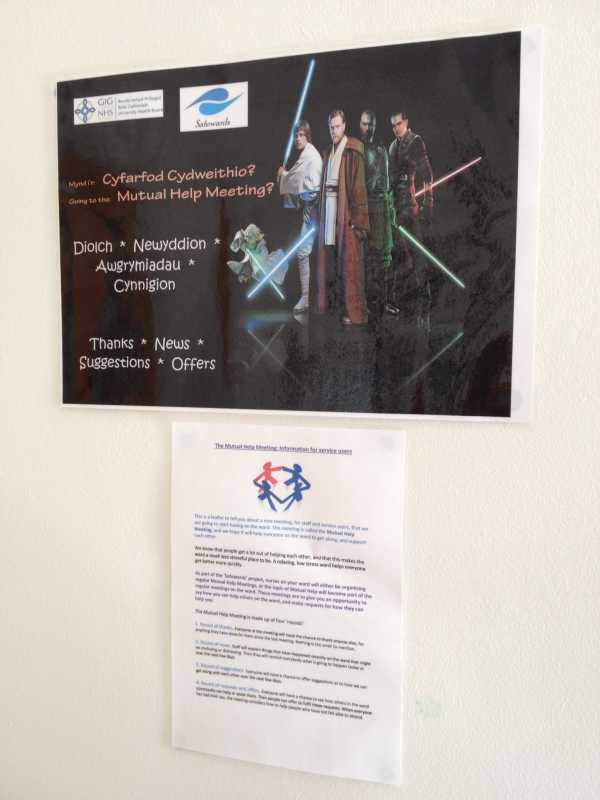 Taliesin PICU first introduced ‘morning meeting’ on 3rd June 2013. The rationale was to provide structure to the day, ascertain patient’s requests for leave/ integration/ any activities and requests that needed extra planning. To offer a safe environment to discuss any concerns or issues and help facilitate and support patients with the peer group.
The meeting was instantly popular with the patients, they felt more empowered and had a greater awareness that request were facilitated in a fair manner. The meetings brought about an increase in activities, staff appeared more motivated and the patients peer group became more understanding and tolerant towards each other.
In the meeting the group decide on a word of the day, create a poster and produce minutes of the meeting which are all displayed on the ward in the language of current inpatients - usually in Welsh, English and occasionally Bengali or Lithuanian.
Staff utilized this meeting to provide any information of ward changes and encouraged patient involvement and opinions on this - this meeting was used to deal with complaints, requests and any issues that needed dealing with - broken TV, ants in bedrooms, as well as good news such as wildlife seen in the garden.
On the 19th February 2014 we incorporated the Mutual Help Meeting, which we translated as Cyfarfod Cydweithio, with the morning meeting. We had asked a patient prior to this to champion the meeting, making posters and helping with facilitating the meetings. Patients were involved in creating Welsh versions of the posters, and translating the guidelines.
The first mutual help meeting was a success, with a greater emphasis on how patients could help each other, and it had a lovely impact on the way patients were interacting with each other after this, with lots of mutual support, about their symptoms, activities and so on.
Rachel Woods, Staff nurse
MHM champion
Photos to follow

Last edit: 8 years 9 months ago by SianTaliesin. Reason: changing photos!
The following user(s) said Thank You: GBrennan
Less More
8 years 11 months ago #103 by GBrennan
Replied by GBrennan on topic Welcome - Mutual Help Meeting
Thank you so much for both of these posts. I always thought that Mutual Help was the hardest intervention in many ways as it requires staff to believe that patients can and will help each other - although we know they do from research, I think staff might often feel wary of exploitation among the patient group . It also requires group facilitation, which is always a much underrated skill. Having said that I know that at least one of the trial wards are still running Mutual Help groups.
So good luck to you on Keats and Talisein, and thanks for these posts that show that not only can it be done, but that it is really worth doing.
Geoff Brennan
Geoff@starwards.org.uk
Less More
8 years 10 months ago #130 by SianTaliesin
Replied by SianTaliesin on topic Welcome - Mutual Help Meeting
The bilingual posters are available for use in any Welsh health board, you'll just need to change the BCU logo and add your own. We will add more bilingual posters etc as we develop them
sian
Sian Williams
Ward Manager
Taliesin PICU
Hergest Unit, Ysbyty Gwynedd
Bangor
Betsi Cadwaladr University Health Board
Sianh.williams@wales.nhs.uk
Less More
8 years 9 months ago #151 by len.bowers@kcl.ac.uk
Replied by len.bowers@kcl.ac.uk on topic Welcome - Mutual Help Meeting
Keats Ward Know Each Other Folder and Mutual Help meeting Folder - and advertising posters! Safewards was everywhere on this ward when I visited yesterday!